Costa Rican animation studio Osopez is developing 3D CGI black comedy series “The Pleasefixers,” its most ambitious project to date, which has been selected for pitching at Ventana Sur’s 3rd Animation! showcase.

“Pleasefixers” follows a special group of people working for a company that deals with washed-out clients who used to be famous and now are desperate for a rebranding that allows them to become popular and get back in business.

“We aim to mix a Pixar-esque aesthetic we use to watch in children’s productions, with long and fun dialogues influenced by Tarantino, Coen brothers or Christopher Moore’s novels, situations within four walls as in ‘The Office’ or ‘Community,’ and a dash of crazy missions involving disguises and tricks, in line with ‘It’s Always Sunny in Philadelphia,’” Arburola said.

“Then it is basically a monster of many heads and of which none are  good persons,” he added.

“That’s probably the safer bet. But little by little, opportunities are opening up with massive series of a more-adult cut – ‘BoJack Horseman,’ ‘Rick and Morty’ – and the audiences are already betting on riskier programs,” he said. 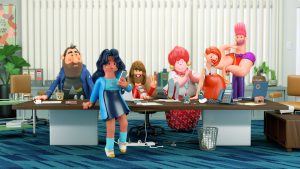 Produced by Marcelo Quesada and directed by Redondo, the series marks the biggest animation bet by Osopez, a San José-based design, illustration and animation studio launched in 2012.

“It implies a drastic change in our company’s business model. It is a bet on generating more IP content than animation services, and to use everything we have learned these years about creating value for brands and offering it to the audiences in our own product,” said Arburola, creative director at Osopez.

At Ventana Sur, the Osopez executive is looking for co-production partners from countries with consolidated animation industries, some big pre-sales or a private equity investment.

“We wanted to involve a Canadian co-producer and a second co-producer from Europe and/or Latin American countries such as Brazil and Mexico,” he said.